There are five grand palaces in Seoul during Joseon Dynasty. 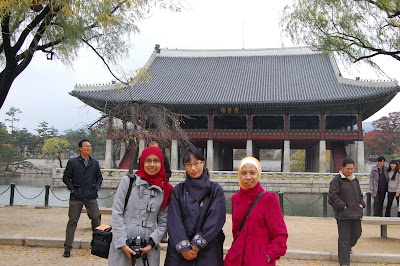 With our English speaking tourist guide.
Check out my Gyeongbuk Palace post here.


Gyeongbuk Palace - translates in English as "Palace of Shining Happiness." located in northern Seoul, South Korea. the main and largest palace of the Five Grand Palaces built by the Joseon Dynasty. originally constructed in 1394 by King Taejo, the first king and founder of the Joseon Dynasty. houses the National Folk Museum of Korea and the National Palace Museum of Korea. (Source: Wikipedia) 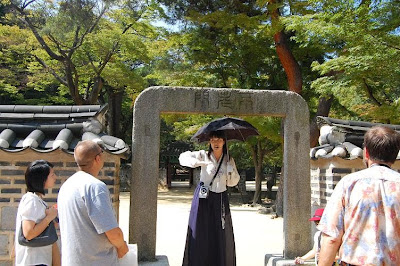 If you go through this gate in Changdeok Palace, you won't
get old. Try it! My post here.

Changdeok Palace - the second palace after Gyeongbokgung. The literal meaning of Changdeokgung(昌德宮) is "Palace of Prospering Virtue". referred to as the East Palace(東闕, Donggwol). was the site of the royal court and the seat of government until 1872. added to the UNESCO World Heritage List in 1997. Portions of the palace were used to film the hugely popular Korean Drama Dae Jang Geum. (Source: Wikipedia) 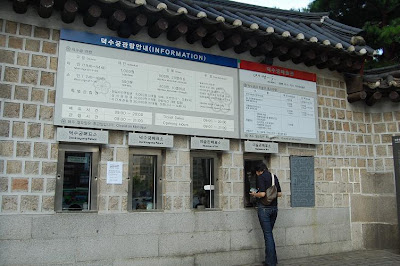 The other two grand palaces in Seoul that I haven't been to are: 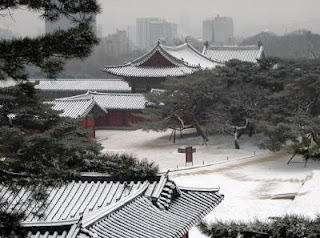 Changgyeong Palace - referred to as the East Palace(東闕, Donggwol). Originally the Summer Palace of the Goryeo Emperor. (Source: Wikipedia). My friends Iris, Nyna, Hanim and Fiza visited the palace recently and I'm going to put up a post for it sometime later.
Official website: http://english.cha.go.kr/

Gyeonghui Palace - literally Palace of Serene Harmony. served as the secondary palace for the king, and as it was situated on the west side of Seoul, it was also called Seogwol (a palace of the west). The Secondary palace is usually the palace where the King moves to in times of emergency. (Source: Wikipedia)


How to go:
Get off at Seodaemun Subway Station,Line 5, Exit 4, walk for about 10 minutes.

Note: From May 1st, 2010, visitors may visit and take a tour of Gyeongbokgung Palace, Changdeokgung Palace (Rear Garden included), Changgyeonggung Palace, Deoksugung Palace, and Jongmyo Shrine by buying one all-inclusive ticket. The ticket is 10,000 KRW and may be used within a month after purchase.
Source: KNTO

For more info, check out KNTO and RoyalPalace