If You Only Have One Day in Jeju Island

I know it's not enough but due to some constraint, time and budget wise; some of us would not be able to spend more than one day. As happens to my friends who will be going in November. The flight from Gimpo Airport would be in the evening, reaching Jeju at 5.00pm and spend a full day in Jeju on the next day and take the earliest flight from Jeju back to Seoul on the day after next.

My reference is none other than; my teacher - Yong Soo sonsaengnim. He gawked the moment I told him that we could spend only a day in the island!! He said two days would be better. Aigoo..hehe.

Anyway, he suggested that we do the following for a day course:

By bus:  from Jeju City or Seogwipo City , get off at Dongnam three-forked road in Seongsan-eup, then take the rotation bus.


"Ollegil (Olle road) refers to a 12-route walking trail in Jeju Island, South Korea. The term Ollegil is made up of two parts: "Olle" and "gil." While "gil" is an orindary Korean vocabulary for a pathway or a road (that can also be used as suffix), "Olle" is a distinctive Jeju dialect. The official Ollegil website explains the meaning of its name as the following: 'Olle' is the Jeju word for a narrow pathway that is connected from the street to the front gate of a house.... It has the same sound as 'Would you come?' in Korean, so Jeju's 'Olle' sounds the same as 'Would you come to Jeju?’ Combining these two terms, a neologism "Ollegil" was formed, referring to the hiking course developed in Jeju Island."

Since it is quite impossible for me to conquer Mount Halla with my current condition, I would opt for the Ollegil instead. I'm gonna choose the one near the beach coast so we could enjoy the magnificent scenery of Jeju Island.

3) Oreum (Volcanic site) - Sangumburi Crater
It is a 26 minute bus ride on the East Tourist Road from the Jeju City Bus Terminal.


I know that many of us are tempted to visit Korean drama filming spots and you are welcomed to go but I feel a bit ludicrous to stand aside a giant board cut out of the actors/actresses rather than the real person in life. Talk about self-criticizing..hahaha. Check this out! 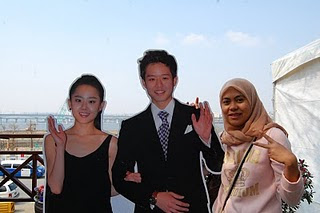 Me with the main stars of Cinderella Sisters. Almost real..^^

I told Yong Soo 선생님,  that I am looking forward to watch the 해녀 women divers in Jeju Island as the picture in my post here. His response was a curious "Why?" I told him that it's unique. None of its kind. He laughed away telling me that the 해녀 are all 할머니들 (grandmothers). He had this expectation that the divers are hot mermaid kind of. Hahaha..but when he actually went to Jeju Island he was in for a shock. They were all grandmothers!! Where's the hot babe he's been waiting for? LOL.

I'm planning to stay for a week or so in Jeju Island and hopefully can attempt as many Ollegil route as possible.